As has already been pointed out by some eagle eyed optics afficionados, Armament just went public with their new optics venture, called SAI.
Armament technologies is best know for distributing Elcan and Tangent Theta products. They do not make Elcan scopes, but Tangent Theta is effectively a part of Armament. Tangent Theta scopes are made entirely in Canada, in-house, so to speak, but they have been looking at a way to bring something not quite as expensive to the market for a little while now. They already market a small red dot sight under their XOPTEK brand and now they are adding another brand, called SAI, to have a range of good quality mid-range magnified riflescopes.
It has been in the works for a little while, but the official announcement was only yesterday:
https://armament.com/sai-optics/
I've known that they are doing this and the kind of scope it is going to be for a little while, but I did not have any specs. I also have not seen one in person, but I plan to test a production unit shortly.
There are several things that stand out so far given a rather cursory look I have taken.
For a FFP Japanese-made LPVO, it is pretty light at 18 ounces. Most of the competition is in the 20 to 25 ounce range, so that's pretty good.
The scope will come with Tenebraex caps and ready for other Tenebraex accessories: filters, killflashes, etc. That's a nice thing. I have an intense dislike for most cheap scope caps, so if you add them, use nice ones. Otherwise, a neoprene cover is all I need.
The packaging is generally well thought out: there is a lanyard that makes the turret caps captive. Illumination dial has alternating ON/OFF position
One of the more interesting features is the reticle.
It has their RAF (Rapid Aiming Feature) that looks to be an evolution of a design they used in a now discontinued Elcan ATOS 3x. I used that scope for a while and then gave it to my brother who still uses it. Once I get the SAI 6 here, I will do some through the scope features with both.
The main idea here is that instead of a horseshoe/circle, the reticle has four prominent bullet-shaped structures pointing at the center of the reticle in a roughly X configuration except the X is on its side.
They are not illuminated, so in low light they are not distracting. Some of the thin lines are illuminated in the center, primarily to aid in low light.
The idea behind this configuration is to provide very visible reticle features on 1x that are out of the way as you soon as you zoom in (common complaint with thick horseshoe type designs).
The way RAF features are spaced out, they give you quick rangefinding on a man size target" horizontal spacing is roughly a man's torso at 100 meters. At 25 meters, it is the spacing between horizontal bars that gives you the same quick range.
Below the primary aiming point (a small cross) there is a BDC tree that takes you out to 800 meters and accounts for wind as well as drop for 5.56x45, presumably NATO load.
On the bottom left is a fairly standard choke-style rangefinder.
Generally, the way the reticle and the scope are configured, I would not be surprised if they are going for some military tender in Canada or elsewhere.
In the US, it will go against Sig Tango6t and a few other similar designs.
I am really curious how it will do once I get my hands on it. 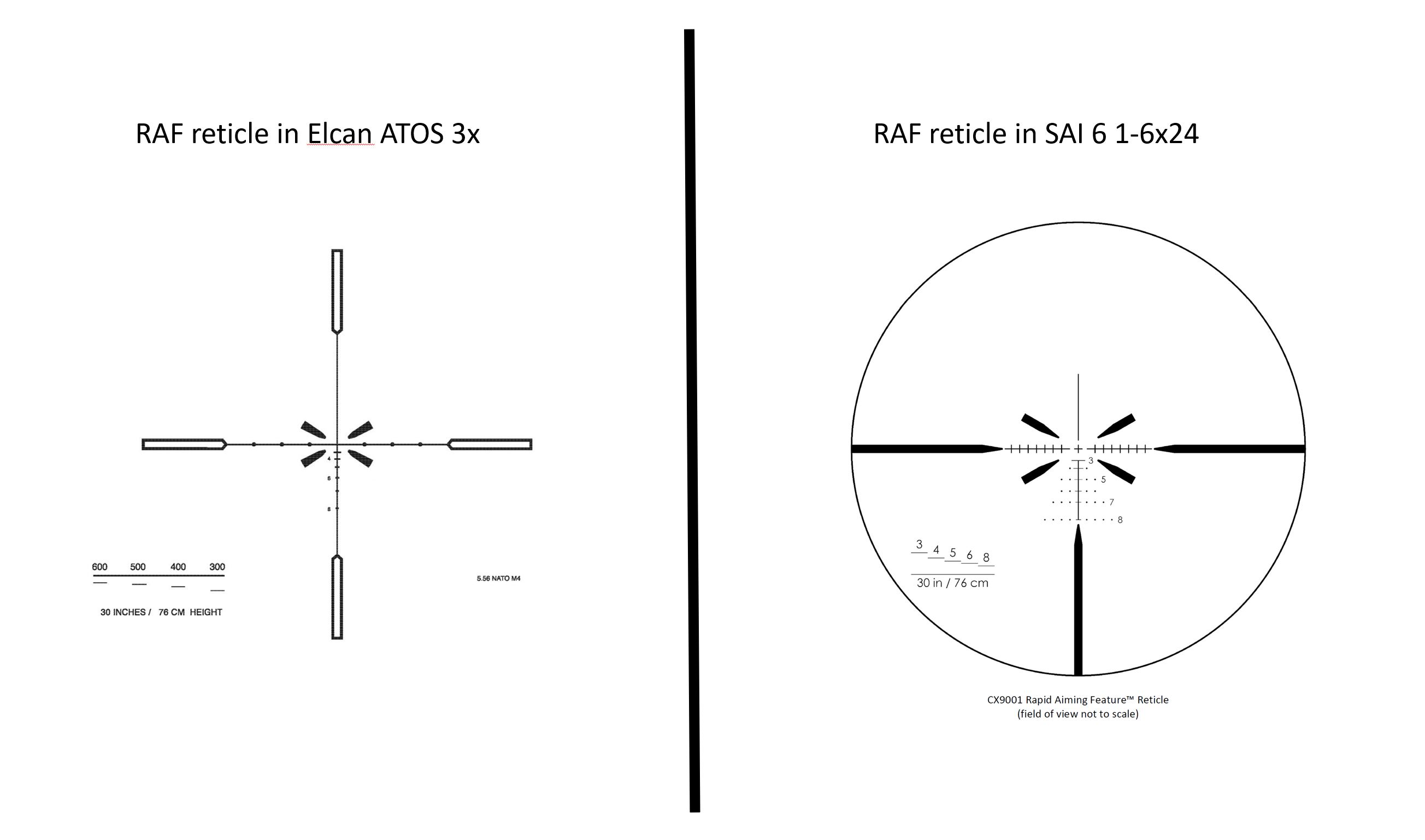 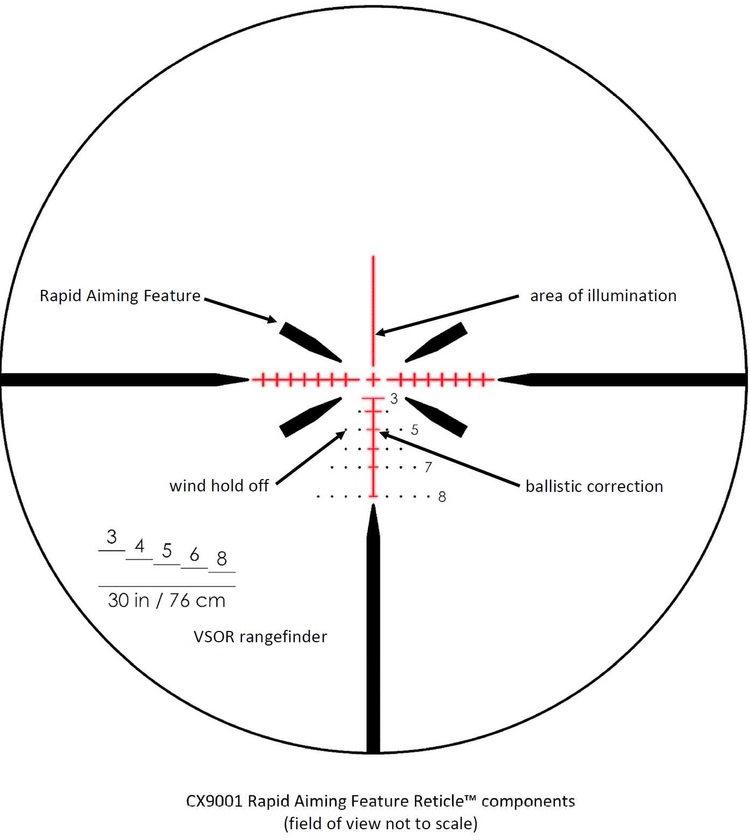 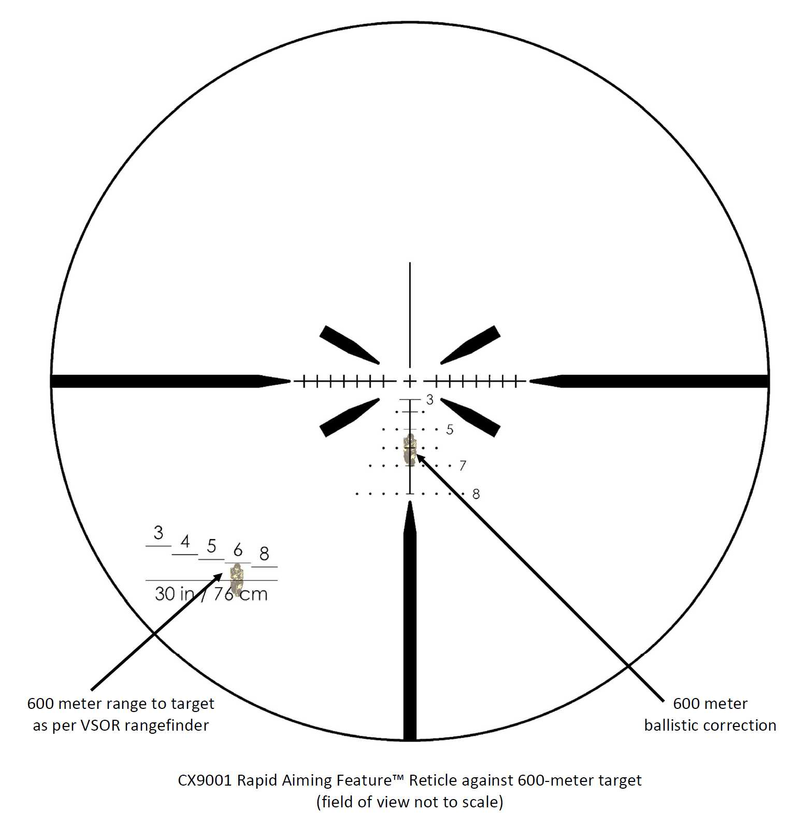 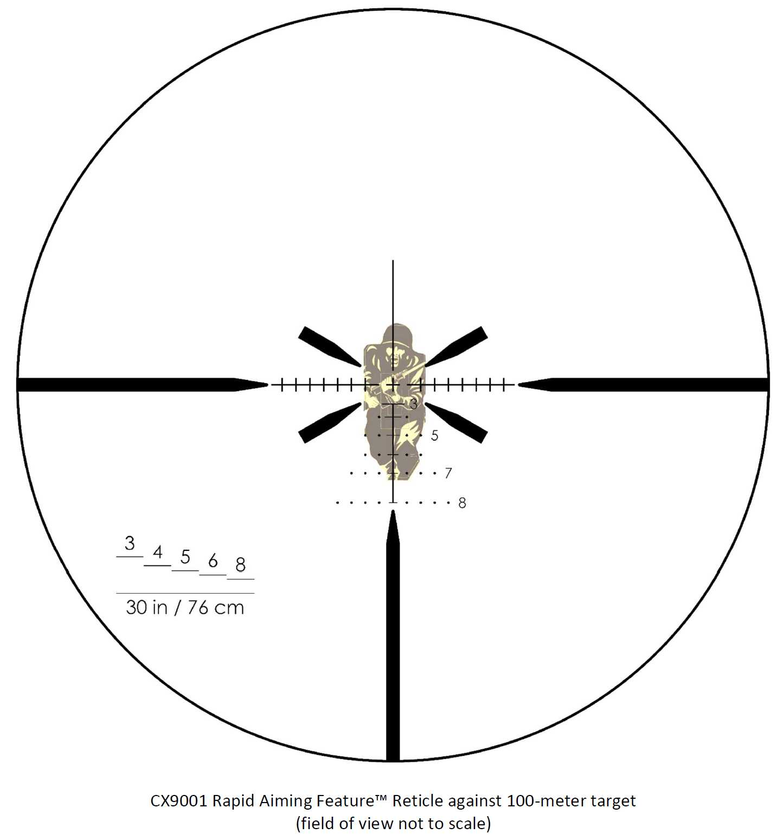 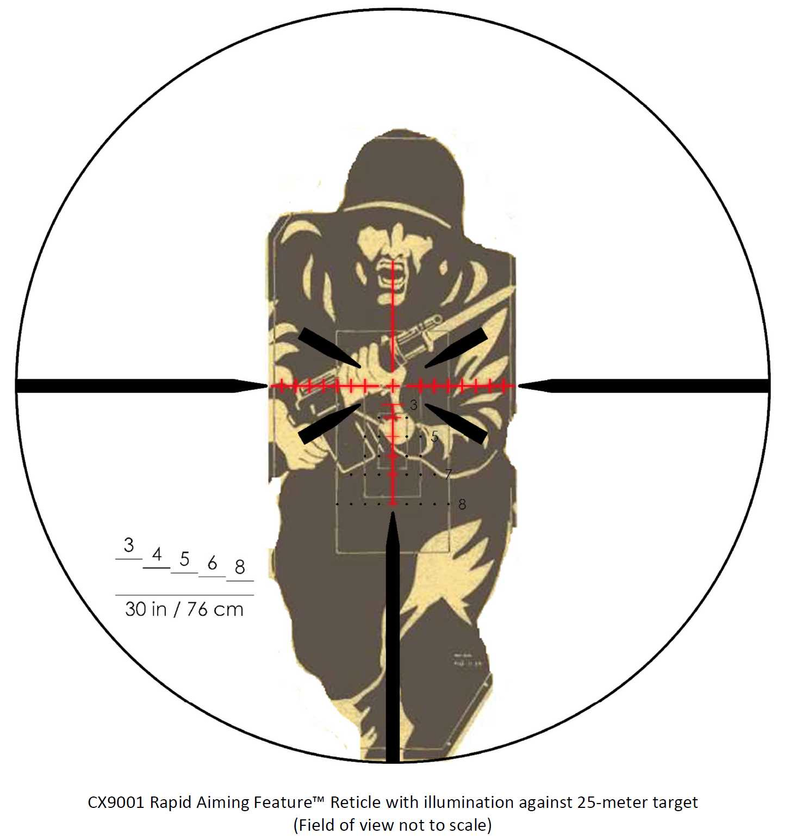