Most of my take on these two scopes is in the three videos linked below.

However, for those who are not itching to watch the entire long thing, here is a brief summary.

I called this review “LPVO Royalty”, but it would probably be more accurate to call it “Tactical LPVO Royalty”. Aside from what I have in the spec table below, there are other equally high performing LPVOs out there aimed at the hunting market. Most of them have SFP reticles (except for the FFP Blaser), but most importantly they have simpler hunting type reticles.

To make it into the mix here the scope had to have the following features:
-High erector ratio LPVO with no more than 1.1x on the low end and no less than 8x on the high end.
-Day bright reticle illumination
-FFP Tactical tree or hash based reticle that facilitates extending the range
-Optical and Mechanical performance commensurate with the $2k+ price tag.

The new Kahles K18i is an exceptionally nice scope based on what I can tell, but it is SFP. Once the erector raton of an LPVO gets above 6x, I prefer FFP. Still, I probably would have tried to get my hands on it, but after I gave a bad review to the K525i, Kahles people are not exactly inclined to loan me anything and I did not want to buy it. If I revisit this topic, I might put more effort into getting my hands on it, but for the time being I had enough to do and my Youtube channel does not make enough money for me to start buying $3k scopes. Given that I do not exactly baby these things, it is not clear how much I could recoup by selling it later. That is one of the reasons I do not like to borrow scopes from private individuals. I do not want to beat up a scope someone paid for.

Nightforce NX8 has a lot going for it in terms of packaging, but I thought it was tricky to get behind and optically subpar above 5x or so. ATACR is a different ballgame, but NX8 is not my cup of tea.

March has several nice high end LPVOs, but the one that would belong in this group is the 1-10x24. It is an interesting little scope (I am looking at a prototype right now), but I do not review stuff that is not in production.

Hensoldt reportedly has a new 1-8x24, but I have never laid eyes on it or seen it in the US.

Blaser 1-7x28 is an exceptional design that could really be in the mix with a tactical reticle, but they do not seem interested in it competing against their sister company's Minox ZP8.

If you look at the attached spec table carefully, a couple of things stand out. The first and most obvious one is that ATACR FOV is kinda narrow and that the S&B is really expensive.

None of these scopes have adjustable parallax, but bot Minox and S&B switch parallax distances as you change magnification. I think I prefer the setting that ZP8 has, but both are very good.

There is a lot more detail in the videos, but in a nutshell, I think the S&B is the best tactical LPVO on the market today, if money is no object, but in terms of bang for the buck, Razor Gen3 is where its at.

I am definitely keeping the Razor, but I am very tempted to buy the PMII as well. It is indeed that nice. 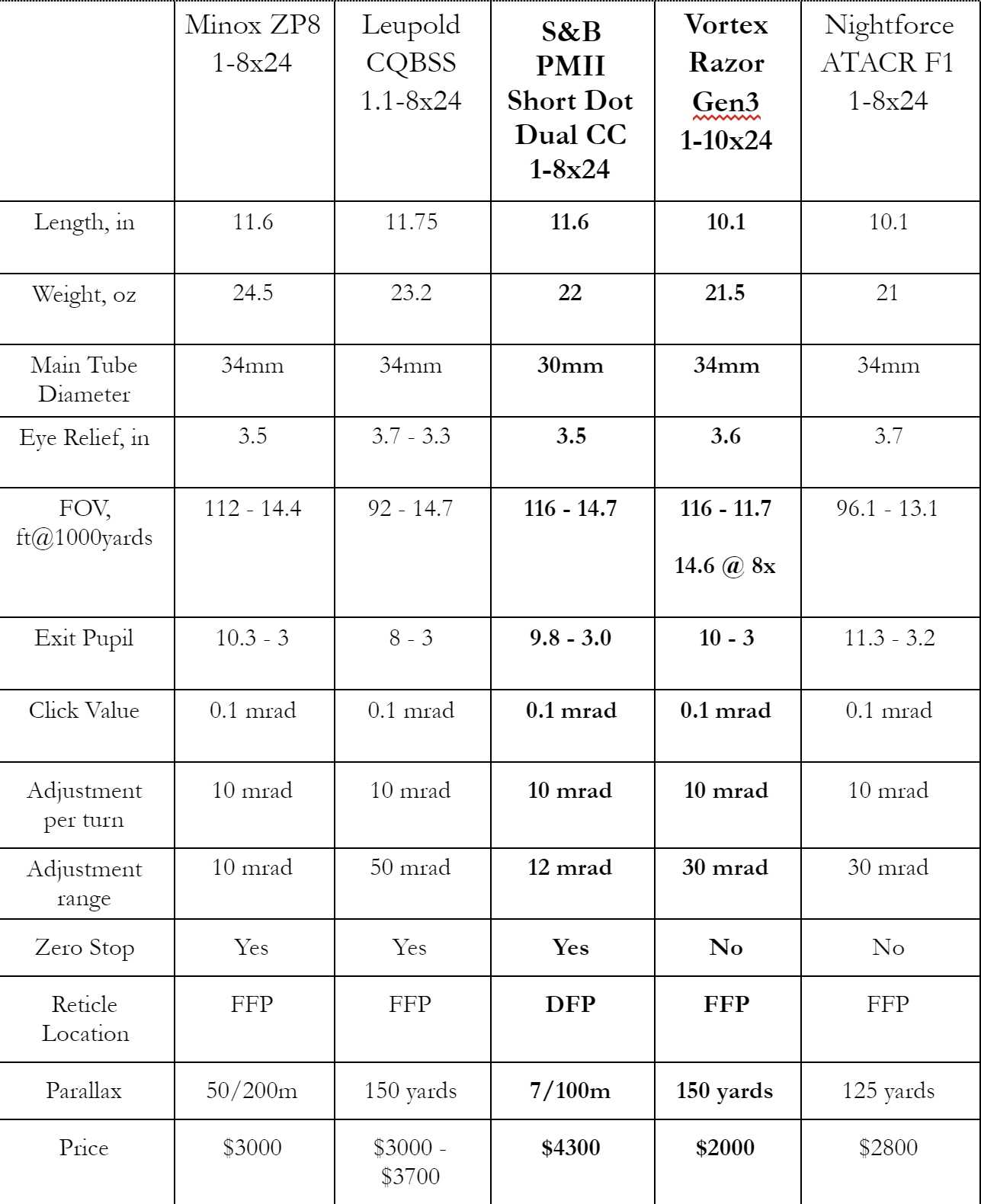